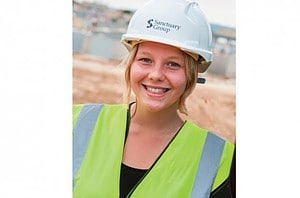 The leading housing and care provider has long recognised the positive impact that apprenticeships have for the individual apprentice, the organisation employing them and the wider industry, and is supporting more than 600 apprentice placements through its £750m development programme to build 5,000 new homes across the UK. Each apprenticeship offers a vital first step towards a career in construction for the young apprentice, while at the same time ensuring that the building industry has the range of trained people it needs in the future. The postcard campaign has been devised by Sanctuary to highlight these factors during National Apprenticeship Week and to thank its partners for their support with the apprenticeship initiative. The postcard features Chantelle Wrighton, a female joinery apprentice working on the construction of Sanctuary’s Middle Deepdale development of 60 extra care apartments for the over 55s in North Yorkshire. The postcard also launches a new website – www.sanctuary-delivering-more.co.uk – where there is more information on Chantelle’s story and others Sanctuary has helped into employment through its development programme. In addition to the postcard, Sanctuary has a series of regional activities planned during National Apprenticeship Week. This includes: Photographs and further details on these initiatives will be posted on the news pages of Sanctuary’s website during National Apprenticeship Week.