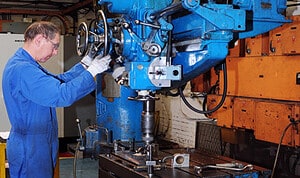 Manufacturers are creating new jobs at the fastest pace since May 2011, according to the latest CIPS/Markit purchasing managers’ index (PMI) survey.

February’s reading of 56.9 for the index – where the 50 mark separates growth from contraction – was better than the 56.6 seen a month earlier.

Levels of production and new business rose at an above-trend rate, which filtered through to the labour market, with jobs creation at a 33-month record.

Despite the impact of flooding on large parts of the UK, the strengthening domestic market was the primary driver of the manufacturing recovery, with an 11th successive monthly rise in production volumes.

New export business also posted a solid gain in February, although the rate of increase eased from January’s near three-year record. Manufacturers reported improved inflows of new work from clients worldwide, including Europe and China.

Markit senior economist Rob Dobson said the survey pointed to another quarter of robust economic growth in the first quarter of the year.

“The manufacturing PMI ticked higher in February to provide welcome reassurance that the sector has weathered the storms and flooding in parts of the country during the month. Growth of production and new orders lost only a little momentum and are still rising at above trend rates,” he added.