A spectacular crane lifting exercise to put in place an iconic 65 metre long bridge in Boston town centre marked the successful completion of an £850,000 contract for Lincolnshire County Council. = 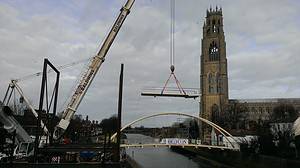 Building, civil engineering and structural steelwork contractor Britcon completed the precision exercise over the River Witham in front of a crowd of spectators last week and officially opened the bowstring arch footbridge, complete with decorative lighting to provide an impressive new gateway to the town.

Britcon was appointed to design and build the new, contemporary bridge in 2013 by Lincolnshire County Council after funding was allocated to replace the existing 1970’s structure.

Andy Newell, Project Manager at Britcon, said, “We hosted a number of workshops to finalise the design details and resolve the many issues of building a bridge on such a confined site.  The new structure is wider than the existing bridge and has an elliptical deck allowing people to admire the nearby Boston Stump without obstructing the crossing. Key features include a non-slip surface and improved access for pedestrians, wheelchair users, dismounted cyclists, pushchairs and mobility scooters. The bridge also colour matches the yellow lighting of the octagonal lantern in the church tower, which is believed to have been used as a marker to guide travellers on land and sea. There is also a tri floral motif installed into the parapet which will replicate the nearby Town Bridge.”

Pre-construction by Britcon included major trenching works to reveal utility locations and a major dilapidation survey was undertaken for the surrounding area and buildings.  It was necessary to construct a mini anchor piling system to avoid vibration adjacent to nearby properties.  Laboratory testing was also undertaken to provide ground information to aid the foundation design.

The bridge components, comprising the central span and two end ramps were fabricated and painted off site and early foundation and ducting works were undertaken while keeping the old bridge operational to minimising disruption. Britcon removed the old bridge using a 500 tonne crane and new steel parts for the central span were assembled in a car park adjacent to the river in preparation for lifting into its permanent position. The lighting installation was also undertaken during this phase with LED lights running through the handrails of the bespoke parapets and up-lighters attached to the main structure.

A 1000 tonne crane was required to lift the bridge in place and the two ramp sections which were transported with Police escort.

The final phase works are now underway to upgrade public realm areas on both sides of the bridge. High quality block paving will be laid to replace the existing and new bollards, ornate street lighting and seating areas will be provided to enhance the area.