Building of a planned 170m viewing tower in Brighton will start in the summer after councillors agreed to take out a government loan for the scheme – and pass it onto developers. 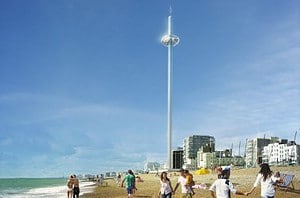 The ambitious plan to draw in tourists with a new south coast attraction looked set to crash when a private backer withdrew a £15m funding offer last year.

But now the council has agreed to provide extra top up lending of £21.4m on top of the £14.8m previously agreed to get the scheme off the ground.

The elevating viewing platform project is to be built near the ruined West Pier and is expected to earn the council three times more than it needs to cover its loan repayments.

The extra £21m in interest payments and fees could be ploughed into crucial infrastructure such as repairing seafront arches, structures, sea defences and retaining walls, currently facing repair bills up to £70m.

It is hoped work could start in early summer to allow the tower to open for the 2016 summer tourist season.

Jacobs are the structural engineer for the project with Gardiner & Theobald aboard as cost consultants. A contractor has not yet been named for the job.

The observation tower will be able to take up to 100 passengers at a time to the top in a glass and steel pod, where there will be panoramic views stretching up to 25 miles.