Skip to content
Canary Wharf Group has received planning to build its first major residential tower on the east London Docklands site. The 58-storey Diamond Tower takes its name from the repeat pattern of the shell supporting steelwork, which will  soar 218m into the sky. 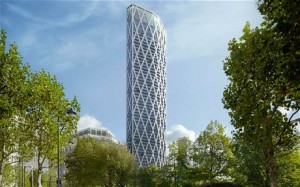 The London Borough of Tower Hamlets has granted planning permission for the tower and it will be referred to the Mayor of London who is expected to rubber stamp final approval. The development marks a new stage in the evolution of Canary Wharf, which first opened in the early 1990s. It is the first of several major residential tower block schemes  to get the green light planned around Canary Wharf on the Isle of Dogs. The tower will include 566 apartments, as well as shops and a health club. Canary Wharf Group plans to begin construction this summer, with completion in 2018. CWG’s Chairman & Chief Executive Officer Sir George Iacobescu said: ”This means the group will, for the first time, be able to offer residential space within the foot print of the Canary Wharf Estate and adjacent to our 800,000 sq ft of retail and transport modes. “I firmly believe that Canary Wharf is an attractive place to both work and live thanks to the incredible retail and restaurant offering, and the robust transport links.”