Skip to content
Every year thousands of businesses – from construction firms, housebuilders, facilities managers and local authorities – will rip out and replace items such as kitchen worktops, doors, cupboards, shower trays, baths and sinks, metal panels and brickwork as they have been scratched, chipped, punctured or had sections in some way damaged. You might think that much of this is recycled, but Britain only recycles 17% of its waste, so the majority will just end up in landfill. But by choosing to repair the damage instead of buying in new kit, organisations can reduce their carbon footprint, according to the Save Our Surfaces campaign launched by surface repair specialist Plastic Surgeon. The company’s MD, Rob Mouser, explains: “The objective of the Save Our Surfaces campaign is to help reduce the amount of unnecessary waste that is created – by highlighting just what can be repaired – when the first instinct has traditionally been to replace damaged surfaces.” 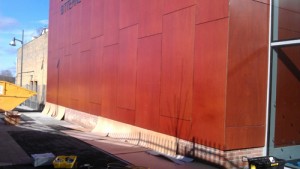 Bitterne Park Sixth Form College is one establishment that has seen the benefits of repair, when tradesmen had damaged a variety of cladding panels on a recently finished building. Plastic Surgeon was already on the Southampton site having tendered for the more routine task of putting right all the little nicks and scrapes that labourers and tradespeople tend to cause when they are moving trolleys, toolboxes and other heavy objects. In fact many of the internal doorframes, which had been fitted with their architraves already attached, had fallen victim to passing traffic and two finishers were booked for 60 hours of filling, smoothing back and repainting some 50 units on three floors. Because the areas of damage were quite small, the finishers undertook what Plastic Surgeon refers to as ‘smart repairs’, mixing by eye the limited amounts of paint required to blend in and complete the repairs. And as a result none of the door linings or their trims had to be replaced. Then, as the scaffolding came down from around the building, and the cladding was cleaned ready for handover, the various sections which had been dented by ladders, or had been in contact with cementitious material became evident. In one area there had even been an attempt to jet wash the cement stains which had only caused the surface coating to lift. With dozens of timber veneered and metal cladding panels in an unacceptable condition, cosmetic repair was the only option open. Andy Keenagh, one of the finishers involved, describes the job: “The wooden panels were thoroughly cleaned up, degreased and given a key by slightly abrading them, before we could begin spraying. While in many situations our involvement saves the main contractor and their clients the additional cost and disruption of replacing items like cladding panels – along with the landfill charges – in this case there was absolutely no chance of purchasing replacements because the European cladding manufacturer had gone out of business.” Spraying the 29 coloured panels was carried out working from access platforms, with all surrounding areas masked off to prevent further contamination. All of the preparation, including extensive filling and rubbing down, and the repainting took the three finishers involved 72 hours. Keenagh concludes: “All of the work at Bitterne Park, both inside and out, had to be done to a very high standard because the frames and the cladding panels we were repairing were so visible. There was also time pressure with areas needing to be handed over to the school, but we succeeded and helped the main contractor out of a very difficult situation.” Another, very different, challenge was to carry out cosmetic finishing work on a new moveable wall installed within the central London headquarters of the Financial Times. Minor damage had occurred to the high specification demountable room divider during transport and installation at the FT’s premises. Employing skills learnt at the company’s HQ and training school in Devon, the finisher rebuilt the surface to its original profile using proprietary two-pack, fast curing fillers, before smoothing the repair areas with a graduation of abrasives. One of the most important skills taught to finishers is the ability to blend and match colours by eye and, in this case, with the aid of a fine brush the repairs were concealed and the entire area was treated with two coats of lacquer to ensure their resistance to further abrasion.