Proposals for University of Cambridge key worker homes at the North West Cambridge Development have been approved today by the local planning authorities. 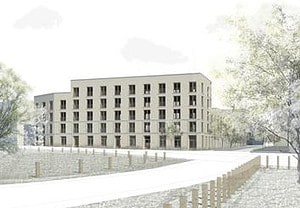 The 73 one- and two-bedroom apartments will be built to the north of the planned development’s local centre, providing a critical mass of University affordable housing alongside other residential buildings and social amenities.

Project director Roger Taylor said: “This response and style of architecture reflects the vision for the development, which is to create an urban extension to Cambridge and we are thrilled that the local authorities continue to support the designs for the North West Cambridge Development.”

Works on the North West Cambridge Development infrastructure will start in 2014 with phased completions from 2016.  It is to be built on a 150-hectare site of University farmland situated in between Huntingdon Road, Madingley Road and the M11. Outline planning permission was granted in February 2013.