Google is planning to re-tender its King’s Cross HQ contract due to radical design changes. 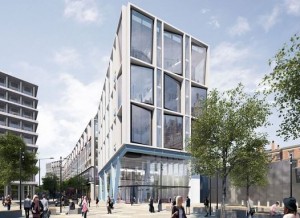 The move will be a blow for BAM Construct who were named preferred bidder on the £300m contract last March after beating-off competition from Skanska and Carillion.

The value of the contract could more than double as architects Allford Hall Monaghan Morris rework the scheme.

BAM said: “While we are very proud to have won the original Google HQ scheme, we took the view a long time ago that its big re-think will be fundamental, and mean that the project won’t happen in this form.

“Like everyone else, BAM will wait to see what Google decides about the future.”

A consultant said: “There has been a lot of speculation about what will happen next. There is even talk that Google may look for a new site elsewhere for its landmark building.”

Current plans for the long narrow site from architect AHMM include a swimming pool and a running track on the roof and space for as many as 5,000 workers.

Work was due to start on site this year but design changes could add up to two years to the construction schedule.