Staff at a builders merchants in Sussex got a shock when they discovered a nest of Great Tit chicks in a stack of bricks.

The chicks’ mother had built the nest in what she thought was a safe and secure place – not knowing that the bricks would be moved 270 miles from Leeds to the Ringmer branch of Chandlers Building Supplies. 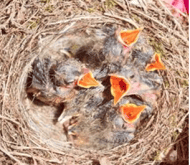 “The first 48 hours were critical, but all five have made it and they’re all eating well.

“They will now be looked after by us until they are ready to fledge, and will be released here in Raystede’s 45 acres.

“As Great Tits tend not to migrate, at just a few days old, they’ve already made the longest journey of their lifetime!”

Richard Skinner, Commercial Director at Chandlers Building Supplies, said: “It’s certainly something you don’t expect to find in a delivery.

“It’s lucky that we have Raystede next to our Ringmer branch and we’re pleased that the chicks are doing well.”