A plumbing and trades tutor from South Gloucestershire has launched a new skills academy to cater for the growing need for trained construction workers. 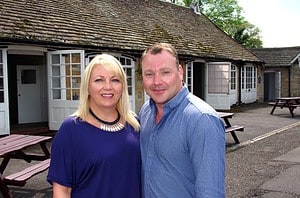 With an emphasis on quality training, small class sizes and one-to-one tuition, Shane McCallum and his wife Nikki have set up the new South West Construction Academy.

Based in a 1,600sqft converted barn in the prestigious setting of Eastwood Park in Falfield, the South West Construction Academy will begin by offering a range of plumbing courses, providing a mixture of distance learning and on-site learning and intensive training.

Mr McCallum’s business plan is aimed at attracting 36 adult students in the first year, before looking to attract school leavers in year two. Eventually the plan is to broaden to other trades such as plastering, electrical and carpentry.

Mr McCallum said: “I’m trying to actually do something about the situations that I don’t agree with in the training set-up for this industry.

“My concern is that class sizes are too big, adults learners are suffering by being included with school leavers and that the focus is on quantity rather than quality. Trainees deserve as much one-to-one tuition as possible.”

And Mr McCallum believes there is huge potential for the Academy, given the pressure on colleges to meet overhead costs and hit targets for Government funding.

He also believes that, with major construction projects such as the new power station at Hinckley Point planned for the future, the industry will shortly be in need of major numbers of newly trained workers.

He said: “I’d also like to deal with local businesses on apprenticeships. I don’t feel local businesses have enough influence in how trainees are taught. So I’d like to be able to teach students the industry standards but also ask businesses if there’s anything else they’d like bolted on so that the graduates come away with exactly the skills that they need.

“That flexibility is something that colleges can’t offer. I want to give companies more of a say on where the money is spent and where the training is going to go.”

Aged 40, Mr McCallum started his professional life as a landscape gardener and one of his early contracts was mowing the lawns at Eastwood Park, the home of his new business.

He was a student among the first year of plumbing trainees at Filton College back in 2005 and has since worked as a tutor at the college for several years.

“It’s an ever-changing industry,” he said. “There’s always new technology and systems to learn so if you like working with your hands it’s a very good industry to get into.

“It’s great to have the venue finalised and I’m excited to get started. I chose Eastwood Park because I looked at a number of industrial units and I didn’t believe they had the feel for a training facility. I wanted somewhere where people could learn.

“They do training at this business venue already, so it’s ideal. The location is fantastically convenient for people from Bristol, Gloucestershire and the rest of the South West – really close to the M5 but quiet too.”

Mr McCallum’s wife Nikki currently works full-time for an insurance broker in Bristol but will work on the administration of the business outside office hours while the new business gets up and running.

The couple currently live in Tytherington near Thornbury but spent many years in Brentry in south Bristol, having met originally in the Gloucestershire village of Nympsfield.