The Government has granted development consent to build the giant Thames Tideway Tunnel project along the Thames in London. 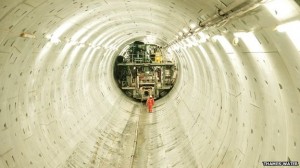 the 25km Thames Tideway Tunnel to be built and operated.

Pickles said: “This is a challenging infrastructure project, but it is clear that the Thames Tunnel will help modernise London’s ageing Victorian sewerage system, and make the River Thames cleaner and safer.”

A construction start has slipped from May 2015 as originally planned to 2016.

The 7.2 metre diameter ‘super sewer’ is designed to stop more than 39m tonnes of untreated sewage being flushed into the Thames every year.

Construction will involve work at 24 sites from Acton in the West to Abbey Mills in the East, along and underneath the Thames.

It will involve using six tunnel boring machines from five drive sites and will directly create more than 4,000 jobs.

The new 25 km tunnel along the river will connect with the Lee Tunnel which is currently under construction.

Work on the Tideway Tunnel will be divided into three lots with contract awards next year.