Lorely Burt MP has praised the engineering, construction and motor vehicle facilities at Solihull College’s Woodlands Campus while visiting the year-old Engineering and Construction Centre at the site in Smith’s Wood. 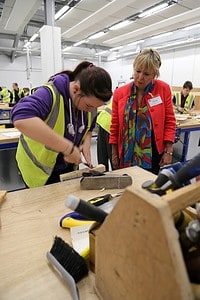 The visit came days after it was announced last week that the Solihull will be one of nine further education providers involved in a HS2 college being built in Birmingham, helping to provide apprenticeships and skills training in areas such as rail, engineering, construction and management.

The dedicated building at the College, which opened last autumn, cost over five million pounds to construct and has twelve dedicated teaching rooms for motor vehicle/motorcycle engineering, carpentry, painting and decorating, bricklaying and plastering. While being shown around the teaching rooms, Lorely spoke to students asking about their experiences at the College and their career ambitions.

Ms Burt comments: “With the high focus on skills within engineering and construction in the West Midlands it is promising to see the standard of facilities and dedication of teaching at Solihull College. I am delighted to have such a great resource for young people in my constituency. The government’s decision to invest in an HS2 college here shows its commitment to building on the West Midlands’ industrial heritage while equipping our young people with cutting edge skills for the future.”

It was recently announced that through the Greater Birmingham and Solihull Growth fund, the government is planning to invest in an Aerospace Centre at the College’s Woodlands Campus, therefore highlighting the need for skills in engineering in the Midlands. In addition to this, and the involvement in Birmingham’s HS2 college, Solihull remains committed to offering apprenticeships through working with local employers.

College Principal John Callaghan comments: “We are always delighted to welcome our local politicians to see what we are offering students as the local and wider economy gets more demanding for young people. The Midlands has always been seen as the industrial capital of the country and through our commitment to apprenticeships as well as further and higher educational qualifications, the College hopes to play a continued vital role in the economy”.

To find out more about engineering, construction or aeronautical qualifications and apprenticeships at Solihull College, please visit www.solihull.ac.uk or call 0121 678 7000