Skip to content
Quintain Estates has selected a panel of 10 contractors to deliver the remaining work on its £2.1bn transformation of Wembley Park, Construction News can reveal. 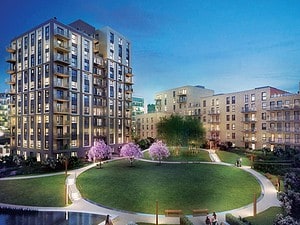 The successful contractors will be asked to tender for the remaining phases within the scheme, which will include residential, student, hotel, leisure and commercial office facilities. The contractors on the panel are Bouygues, Carillion, GB Solutions, Higgins, John Sisk & Son, Kier, Mace, Vinci, VolkerFitzpatrick and Wates. Projects will range in size up to the “hundreds of millions”, according to Quintain head of construction Matt Voyce, with contractors chosen depending on their areas of expertise and “appetite for risk” on jobs. He said: “As projects come forward we will select from the appropriate contractors on our panel. “We look to engage with our panel on a quarterly basis in order to make sure we are giving them [notice] of emerging plans, while we hear first-hand about what’s happening in their businesses.” Three contractors from the panel have already been shortlisted for the next phase of the project’s North West Village (pictured), comprising 370 homes as well as public space. They are Bouygues, Kier and Wates. A contractor is expected to be appointed by the end of February. John Sisk & Son has won the bulk of work at the Wembley scheme, earning the contractor around £300m to date. It is working on construction of the 475-home ‘Emerald Gardens’ phase of the redevelopment. The project consists of seven buildings arranged around private gardens, next to the civic centre and the London Designer Outlet, which were also developed by Quintain. Other projects in the completed first phase of the development included the renovation of Wembley Arena and construction of 500 residential apartments. Quintain has also completed a 361-bed Hilton hotel, a 660-bed student accommodation scheme and a multi-storey car park. Mr Voyce said that the developer wanted to mirror the relationship the group had established with John Sisk & Son with the other contractors on the panel. He told Construction News: “It is important to us to have contractors that are like-minded to Quintain and who want to have a long-term working relationship, and want to sit alongside someone like John Sisk & Son, who has performed very well for us and who we have had a relationship with now for seven [or] eight years.” In November 2014, the developer announced the extension of its development pipeline to more than 1,700 homes across the entire western half of the scheme, with construction due to start on half of these by the end of this year. Mr Voyce said “recognising the need to accelerate delivery” was an important factor in selecting the firms. The panel strengthened Quintain’s commitment to be transparent with contractors, he added. “That level of commitment and method of working is what we expect from our suppliers, as well as loyalty [to Quintain].” Among the contractors on Quintain’s panel, Wates and GB Solutions have previously bagged contracts on the Greenwich Peninsula regeneration. Quintain severed its ties with the south London scheme in November 2013, after it sold its remaining stake in the project to Hong Kong billionaire Henry Cheng Kar-Shun’s investment company Knight Dragon. The Greenwich Peninsula scheme was originally a 50/50 joint venture between Quintain and Lend Lease before Knight Dragon bought out the latter’s share in 2012. This week’s news came ahead of the relaunch of Quintain’s masterplan for Wembley Park. The company is working with stakeholders and its design team to produce the revised masterplan. But Mr Voyce was unable to confirm which schemes would be altered in the plan, including whether the 5,000 homes target would be increased or lowered.