Skip to content
While some reports say we are finally seeing the light in between the trees out of recession times, others would disagree and still see heavy public and private sector cuts, meaning the recession is still very much among us. When hiring contractors to provide a service, it is important to do your research. You may want to consider the following questions like do they have a good reputation for the work they deliver. Have the worked with similar clients in your industry. Whilst you may collect a number of quotes which may be priced differently, it is important to find out if the price reflects the quality and use BIL Castor Wheels Line marking contractors KVR Coatings have over 30 years of lining and floor coating expertise and an extensive portfolio including Swansea Football, Marks and Spencers and Aldi. MD at KVR, Mark Loughton provides some examples of line marking installation that went badly wrong. When it comes to line marking, you would think that there would be only way to get the job done, and that one company is just as good as another. That reasoning is not true for any industry, and it certainly isn’t true here either. For one thing, wherever there is human involvement, there will always be the temptation to cut corners. Some people don’t give those temptations a second thought, because perfection is second nature to them, others however just can’t help themselves. The case of the napping tree… This line marker is so considerate, he even left this fallen tree alone so that it could finish its nap in peace. Did he wait patiently for the tree to wake up and move off? No, but that would have been preferable to this. 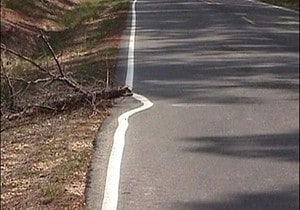 What really baffles the mind, is that if you look closely, you can clearly see a small wobble just before the tree… It looks as though the painter hesitated, thought “this might be a bad idea” and just carried on regardless! Taking just one moment out of his day to move that tree, would have been far more preferable than this. Can you walk in a straight line, sir? Regardless of occupation, drinking on the job is never advisable… But when the consequences of your actions are going to be displayed for the whole world to see, and for years later on down the line, then maybe that ‘one for road’ the night before is not such a great idea. 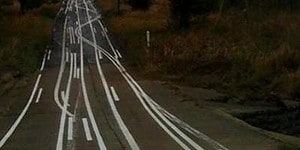 We’re not sure of the intention here, or even if there was one. Whatever happened, and whatever the cause, you can bet the local authority responsible for those roads wish they had hired somebody else! Dictionary Corner Once in a while, most people will spell a word wrong, and sometimes it may happen frequently. The difference is, though, that most people can edit and correct the text they have entered, but for line markers, it just isn’t that simple. If only there was a way. 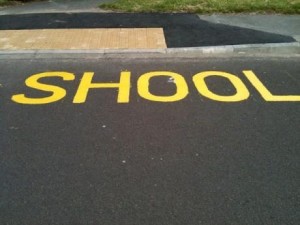 Line painters need to be perfect with their spelling, though, and they can’t break out the correction fluid if they make a mistake. If you have road markings that have to be spelled correctly, make your hiring decision wisely. Aside from the amusing mishaps, there is a serious lesson to be learned. Road markings were first introduced to the world in 1911, by a chap named Edward Hines. Mr Hines got the idea for a centre line after observing a leaky milk wagon leave a white trail behind it. No doubt realising how it could make the road easier to navigate in low light, he wasted no time in putting his road marking plan into action. Line markings have been helping to save the lives of road users ever since, and it is just as important now, as it was then that they are done properly. Getting the line straight, and in the right place just isn’t enough – it has to be bright and durable too. There is no room for corner cutting when it comes to public safety, and every care should be taken to make sure that things are done properly, to spec and to the highest standard possible – whether it is road markings, or car park spacing. If that means not always opting for the lowest bidder, then why not? Safety and professionalism can’t always be bought for budget prices.