Thousands of people were evacuated from offices in central London on Wednesday afternoon when a fire broke out in cable ducts under Kingsway in Holborn.

Flames shot out of an inspection cover and smoke engulfed the area as 70 firefighters tackled the blaze.

Evening performances were cancelled in local theatres as the neighbourhood suffered blackouts. 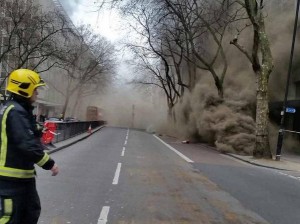 Fire crews were still at the scene on Thursday morning.

“The reason that the fire is still burning is because the service tunnel is hard to reach and although firefighters have been applying water through access points throughout the night, the complexity of the tunnel layout means that it will be some time until the fire is fully extinguished

“However, the fire is contained and we are making steady progress and working with the utility companies and the police to bring this incident to a close.”