The major milestone on the £14.8bn scheme has seen boring machines drive through 26 miles of new tunnels 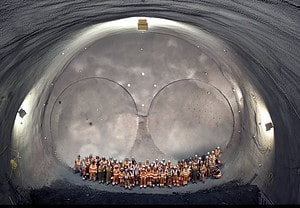 Transport Secretary Patrick McLoughlin joined the Prime Minister and the Mayor of London at Farringdon today to celebrate the end of tunnelling on the Crossrail scheme.

Work began in the summer of 2012, with eight 1,000-tonne tunnelling machines boring 26 miles of new rail tunnels underneath the capital.

Prime Minister David Cameron said: “Crossrail is an incredible feat of engineering that will help to improve the lives of working people in London and beyond.

“The project is a vital part of our long term plan to build a more resilient economy by helping businesses to grow, compete and create jobs right along the supply chain.”

McLoughlin added: “This is a major milestone in the most ambitious rail project this country has seen for decades.

“The Crossrail project showcases British engineering at its best, and I congratulate everyone involved in this impressive achievement.”

Construction work will now focus on fitting out the new tunnels and stations, with more than 12,000 people currently working on the scheme.

Over the course of the project, it is estimated that Crossrail and its supply chain will support the equivalent of 55,000 full-time jobs across the country.

Key Crossrail milestones to date include:

Start of Crossrail construction began at Canary Wharf on 15 May 2009.

The first giant tunnel boring machine broke ground in May 2012. 42 kilometres of new train tunnels have been created under London. All eight Crossrail tunnelling machines have now completed their drives.

Another 13.5 kilometres of new passenger, platform and service tunnels have been constructed within the new Crossrail stations using a technique called sprayed concrete lining.

The surface works, delivered by Network Rail, are now over one-third complete.

All 40 Crossrail stations will have step free access from street to platform.

Over 450 apprentices have gained work on Crossrail. More than 8,000 people have undertaken training at Crossrail’s Tunnelling and Underground Construction Academy in Ilford, which opened in 2011.

Crossrail has plans in place to develop over three million square feet (gross) ofcommercial, residential and retail space above its stations and construction sites. Over 1 million square feet of this now has planning permission including Bond Street West (Davies Street), 101 Moorgate, Fisher Street and a number of developments above Crossrail Tottenham Court Road station

The Culture Line, a programme to deliver a permanent exhibition of large-scale world-class artworks in Crossrail’s central London stations is being delivered in collaboration with leading art galleries. The City of London Corporation is 50 per cent match funding the art works.