After several flat years, the commercial property market in London has really taken off. In 2014, investment in commercial property in the city reached record-breaking levels. During the first 3 months of 2014, over £4.3bn was invested into commercial real estate in the centre of London and the tide of money has not stopped since.

Much of that money has come from overseas investors who are looking for a slice of the pie. They know that the availability of office space in Mayfair, The City of London and other business districts is limited. Yet there is a lot of demand with thousands of new firms setting themselves up in the capital every year. For investors interested in commercial real estate London presents a fantastic opportunity. 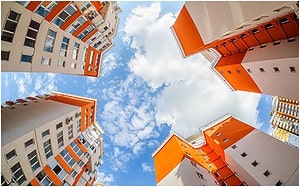 The influx of money and the fact that the recession appears to have ended in the UK is fuelling a building boom in the capital. Despite this construction boom, demand for office space in the capital is nowhere near close to being met. During the first 3 months of 2015, tenants rented 2.4 million square feet of office space in the UK’s capital city.

Much of that space was in London’s new skyscrapers. Floor space in The Shard and The Gherkin is at a premium. Even The Walkie Talkie, which only opened in 2015, has a high occupancy level. Many of London’s office buildings are close to being full.

Fortunately, there are several other buildings under construction, and various regeneration projects going on throughout the city, including in the suburbs.  However, whether this will be enough to meet the growing demand for office space remains to be seen.

Currently there are 70 tall buildings under construction in London with another 200 being planned. Most of the skyscrapers planned for the city are still on the drawing board. Some will be built, but not all of them will get past the planning stage or find finance. A high percentage of these buildings are planned to be for mixed use, which means that the actual square footage of office space being added to the pool is going to be relatively low despite the building frenzy.

Historically the tower blocks in London were concentrated in the Canary Wharf area. Over the past few years, several high-rise blocks have been built in the financial district and that is a trend that will continue with ten blocks being planned for the area. However, the majority of the tall buildings to be built over the next decade are going to be strung out along The Thames, all the way from Chelsea in the West to The Royal Docks in the East.

For the first time in decades, much of the development is taking place south of the river. Twenty-three of the seventy tower blocks currently under construction in the capital are being built on the southern side of The Thames.

As well as new office space, there are plans to develop new warehousing, industrial units and other types of commercial spaces across London. This means that there is plenty of choice for those who want to invest in commercial property in the UK’s capital city.

city of London, although it would be an apt name for the new skyscraper that is soon to be built at 52-54 Lime Street. This spiky skyscraper has planning permission and is set to open in 2017.

The skyscrapers that are already in London are just the start. There are plans for another 250 tower blocks. Not all of them will get off the drawing board, but enough of them will be built to transform London into a true high-rise city, and go some way to helping to meet the increasing demand for office space in London.