Emergency resurfacing work took place on a stretch of the M6 on Saturday after a lorry fire melted parts of the road. 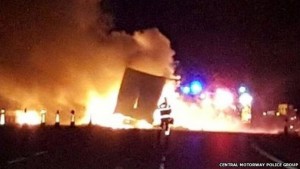 Highways England said: “The M6 southbound is closed between junctions J13 (Stafford South) and J12 (Cannock) due to a severe HGV fire which engulfed all lanes of the carriageway shortly after 01:30 this morning.

“The intensity of the fire has caused extensive damage to the carriageway and resurfacing is required.

“The southbound carriageway is therefore expected to remain fully closed into the mid/late morning today.”