Construction at a new housing development at Manor Farm, Stretham is now under way following today’s official ground breaking ceremony. The project is the first of its kind to be developed in East Cambridgeshire involving a 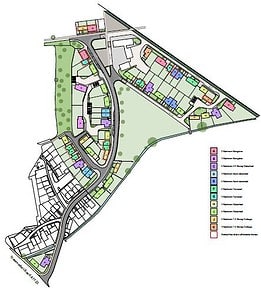 The new development includes 50 homes, a third of which will be affordable. A new doctor’s surgery and several small business units will also be constructed, to boost the community’s amenities and economy. After extensive community consultation, the buildings have been designed around a large village green crossed by footpaths, cycle routes and bridleways. Laragh Homes has worked closely with the Stretham and Wilburton Community Land Trust to ensure that the Manor Farm development fits seamlessly with local housing, and enhances the existing community.

As well as the importance placed on green outdoor space, all buildings in the scheme also have solid green credentials. Designed and constructed to ensure maximum energy efficiency, the heating will come from air source heat pumps whilst the homes will have excellent insulation.

The start of works on site was marked with the planting of a cherry tree by Charles Roberts, Chairman of the Stretham and Wilburton Community Land Trust alongside Simon Somerville-Large, MD of Laragh Homes. “This is a truly great day,” said Mr Roberts “and in one year’s time when we welcome the first residents into their new homes, it will be an even greater day”.

Simon Somerville-Large, MD of Laragh Homes said: “It’s taken us about three years to get this far but it’s worth it because we’re investing in knowledge for the future and working with local communities. We are really keen to pass on our experience from here, working with other community trusts who don’t need to be dependent on any third party funding. Manor Farm will become a natural extension of the village.“

The Stretham & Wilburton Community Land Trust is the first of its kind in Cambridgeshire and one of only 170 CLTs across the country. In recent years, CLTs have become increasingly important in responding to the national housing crisis as CLT developments aim to deliver genuinely affordable housing as well as other assets important to the community.

The Manor Farm site was originally owned by Peterhouse College, Cambridge. Mr Somerville-Large said: “Peterhouse recognised the value of this scheme to the local community and were of enormous help in keeping costs down and facilitating community involvement. Without their cooperation we couldn’t have done it.”

Plans for Manor Farm will be available at the start of November with further information available from Cheffins of Ely who will be handling residential sales www.cheffins.co.uk.