Chinese developer Greenland Group has submitted plans to build a 67-floor residential skyscraper at the western end of the north dock in Canary Wharf .

The redevelopment of Hertsmere House at West India Quay will deliver 869 flats within a 240.5m tall building, designed by architect HOK around a clover shaped footprint to maximise views for each flat.

When built it is expected to hold the record as the tallest block of flats in Europe.

The basement runs to a depth of just 11.7m as the site sits above Crossrail running tunnels, although all piling will be outside the Crossrail exclusion zone. Affordable housing will be included in the western wing of the building.

Around half the building facade is to be fitted with vision glass and the remainder will be fitted with highly-insulated metal panel backed glass curtain wall known as “shadow boxes” to give the building the appearance of being fully glazed from the exterior while reducing solar gain. 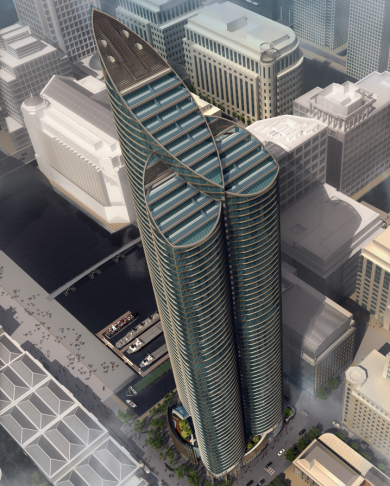 Planning permission was previously granted for a 242m 63-storey commercial tower on the site but these plans were superseded by the new residential scheme.

The Shanghai-based developer is also developing the high-rise Ram Brewery scheme in Wandsworth, London where Kier is carrying out phase one works.