London, United Kingdom, 29 February 2016: The Considerate Constructors Scheme – the national scheme to improve the image of the construction industry – has announced a new star ratings system.

Star ratings posters and certificates will be available to use alongside existing Considerate Constructors Scheme signage. This will provide an opportunity for those registered with the Scheme to show to the public how they have performed against the Scheme’s Code of Considerate Practice.

They have been created in response to contractors and clients asking for an easy way to demonstrate their considerate credentials to the public.

The new US Embassy, which is currently under construction in Nine Elms in Wandsworth, has achieved the top 5 star rating. The site, which is being constructed by B.L. Harbert International, in conjunction with Sir Robert McAlpine, is due to open in 2017.

Scheme Chief Executive Edward Hardy said: “The introduction of the star ratings system provides an easily identifiable and quantifiable way for the public, local community and workforce to understand the extent to which sites and companies are performing against the Scheme’s Code of Considerate Practice.

“This Code is designed to encourage the industry to improve the image of construction through caring about appearance, respecting the community, protecting the environment, securing everyone’s safety and valuing their workforce. We believe the introduction of these posters and certificates will help to present an even more positive image of the industry to the public”.

B.L. Harbert International Project Manager Matt Goldsworthy added: “B.L. Harbert is honoured to receive such recognition. It could not be possible without all of the hard work and dedication of all the people on site that have all contributed to make this happen”.

Sir Robert McAlpine’s Project Manager Bob Kay commented: “At the New London Embassy we take pride in providing a working environment that not only attracts like minded personnel to the site but aims to do so in a way that demonstrates our commitment not only to the site and its personnel but also to the wider community. Receiving such recognition from the Considerate Constructors Scheme demonstrates that we are achieving this aim.” 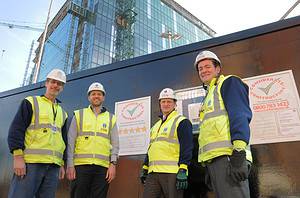 Cllr Ravi Govindia, leader of Wandsworth Council and co-chair of the Nine Elms Vauxhall Partnership, said: “With so much construction activity underway, it is essential that the growing numbers of people living and working in Nine Elms have clear information about how construction sites are performing. I am delighted that B.L. Harbert International and Sir Robert McAlpine have been recognised for their sterling work on the new US Embassy: creating an iconic new building for Wandsworth and for London.”

Find out more about the new star ratings posters here