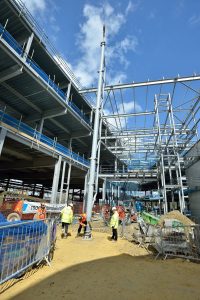 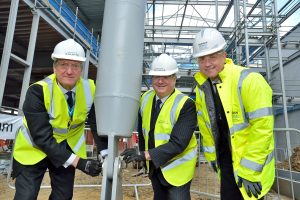 A STEEL truss 16.2 metres tall that will be at the structural heart of the University of Huddersfield’s latest building was carefully lowered into place by a giant crane, guided by a team of construction workers.  But it took just a few turns of an Allen key for it to be secured by the trio of dignitaries called on to perform a special ceremony.

The event was a variant on the traditional “topping out” that marks a crucial stage in construction projects.  It usually revolves around the installation of a final beam at the top of a structure.

On this occasion, however, the “topping out” took place at ground floor level as one of the twin trusses that will act as a frame for the main entrance to the building and support its roof was manoeuvred  into a steel “shoe” that will anchor it.  A stainless steel pin was then inserted and tightened by the Vice-Chancellor of the University, Professor Bob Cryan, the High Sherriff of West Yorkshire, Mr Chris Brown – who is also chair of the University Council – and Mr Pat Boyle, who is MD of Morgan Sindall Construction Infrastructure, the projects main contractors.

Morgan Sindall is the firm that is constructing the £27.5 million Oastler Building, which overlooks the busy Aspley Roundabout, and it was designed by Huddersfield-based architects AHR Global.  When ready for use in early 2017, it will be a new home for the study of law and the humanities at the University.

The trusses were manufactured by the Elland Steel Structures Ltd, which has fabricated 674 tonnes of components for the new building.  They were trucked to the University in the early hours of Tuesday 4 May, so as not to disrupt peak-time traffic.

The University’s Department of Estates and Facilities encouraged the architects and the building contractors Morgan Sindall to use local manufacturers and suppliers as much as possible in the design and construction of the building.

The structure’s steel and aluminium frame will be faced with 2,092 square metres of glazing, fabricated by Huddersfield firm Dual Seal Glass Ltd and Brighouse Company HWA.  Other major contributors include the Myers Group, proprietors of Johnson’s Wellfield Quarry at Crosland Moor, Huddersfield.  It has furnished 1713 square metres of locally quarried stone and is a major supplier of concrete for the structure. At a celebration lunch following the topping out ceremony, there were guests from many of the firms and practices involved in the project, including Morgan Sindall, AHR Global and structural engineers Tim Stower and Partners.

Professor Cryan said that the new Oastler Building would be an ultra-modern structure for a dynamic university, but one that would preserve the memory of one of the most inspirational figures in the history of Huddersfield.

Richard Oastler, who lived from 1789 to 1861 was based in Huddersfield when he began his famous campaign for a reduction in the hours worked by factory children.  He described their plight as “Yorkshire slavery”.  Oastler became known as the “Factory King”.

“As a university, it is important that we not only work for the benefit of our students, but also support the local economy,” said Professor Cryan in his speech prior to the luncheon.  “The building of this structure is a good example of those efforts and I am very glad that today that we can welcome senior figures representing key partners in the design and construction of the Oastler Building, many of them local companies.”