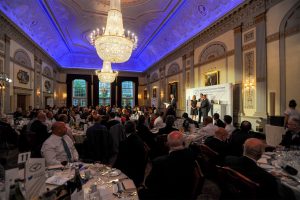 Top performing registered companies and suppliers get ready to celebrate success at Considerate Constructors Scheme National Awards London, United Kingdom, 1 November 2016: The Considerate Constructors Scheme – the national scheme established by the construction industry to improve its image – is getting ready to reveal the UK’s most considerate companies and suppliers of 2016. The Scheme, which has registered around 900 companies and suppliers in the past 12 months, will be hosting the 2016 National Awards on 10th and 11th November, at the luxurious Four Seasons hotel on Park Lane. Supplier Registration was introduced in 2014 and this year’s awards mark the first year that suppliers will be eligible to win a National Award. Richard Beresford, Chief Executive of the National Federation of Builders, and Liz Male, Chairman of TrustMark will be announcing whether each winning company has received a Bronze, Silver or Gold Award for their achievements. There will also be Runner-up Awards and winners for the coveted ‘Most Considerate Company’ and ‘Most Considerate Supplier’ Awards. Considerate Constructors Scheme Executive Chairman Isabel Martinson said: “The Awards celebrate the phenomenal efforts being made to improve the image of the industry for the benefit of the public, the workforce and the environment. “It is particularly exciting this year to be awarding, for the first time, the significant contribution that suppliers are making. As the industry knows, suppliers perform a vital role in the construction process, and have a significant responsibility to behave in a considerate manner at all times to ensure they portray a positive image of the industry they represent.” Follow the awards on Twitter at @CCScheme #ccsawards.