Skip to content
Planning permission has now been granted for the nine-storey building at 262 York Road on the site of a Shell petrol filling station – the last undeveloped site at Battersea Reach, a mixed-use development fronting the River Thames. 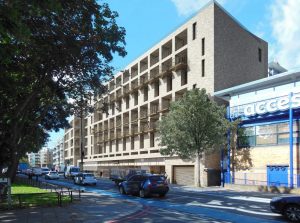 Multi-disciplinary consultancy Meinhardt UK is using its expertise in modern methods of construction and structural engineering to realise the architect’s vision for a new build-to-rent development despite a unique set of challenges.   Working with clients Angle Property and architects TP Bennett, Meinhardt was originally asked to look at a scheme that would have seen the development rise above the petrol station. Although that plan achieved planning consent, the client decided to acquire the lease of the filling station and demolish it, and the revised application, for a building of approximately 10,000 sq m of floor space, has now achieved planning permission.   The development includes a commercial unit at ground floor with office, retail space and a lobby, ground floor car parking and a one-storey partial basement, which will house bike storage, plant and back of house. Removing the filling station made room for an additional storey of residential accommodation adding a further nine units. The apartments are a series of duplex units designed to stagger over the course of each level.   Large protruding balconies are a key element of the development, and Meinhardt coordinated extensively with the architects to accommodate these, and to incorporate the thermal break requirements in a twin wall construction frame. There is a terrace at first floor level and residents’ amenity spaces on some floors. Penthouse flats on the top, stepped back from the perimeter, are built around a lightweight steel frame.   Meinhardt’s design does not hinder the overall architectural solution because it sits on a transfer platform from which the structure can fly up. The MMC solution is predominantly twin wall and precast lattice slab over the insitu concrete transfer deck. That will accelerate the construction programme, and so that it does not impede the architectural layouts, Meinhardt’s team designed around tricky features such as a central corridor, which would otherwise have impeded the use of twin wall construction, and circumvented tricky sun rooms with steel beams.   Following planning permission, the client intends to tender for a contractor in autumn with start on site in the early 2018. Meinhardt will work with the contractor through an anticipated 18-month construction period to a mid-2019 completion.   Despite the decision to remove the petrol station, the site still poses all the underground complications of having been occupied by one. Meinhardt will work with geotechnical specialists to tackle complications including contamination. Obstructions such as the fuel tanks serving the filling station will have to be removed. A search of the site’s history revealed the ground also conceals a gas tank, likely a reinforced concrete wall with basement construction, which will either have to be removed or designed around.   The Meinhardt team has spent a year developing the design from work on the original idea through to planning consent on the current one to replace the filling station, and will now work with the contractor to see the project through to completion. The key outcome is enabling the use of MMC without impeding any of the architectural layout.   This is the second PRS scheme employing MMC in London that Meinhardt has worked on during the pre-planning process, the other being Greenford Green, Ealing, the UK’s largest purpose designed build to rent scheme, which will create almost 2,000 new homes.