Skip to content
Since the enforcement of the EU Occupational Safety and Health (OSH) Strategic Framework in 2014, the numbers of accidents at work have been dropping, suggesting a positive impact on health and safety regulations and compliance at the workplace. The framework analyzes key challenges and strategic objectives for health and safety at work and aims to identify actions and instruments to address these objectives. But whether workers actually feel safe at work is a different matter. Perception of safety or danger is none the less a very important question that can have a significant impact on a worker’s performance and well-being at work. Health and safety consultants Arinite compared research from Eurofound on the perception of safety in the workplace with Eurostat’s recent analysis of health and safety incidents across the EU 28 countries. This is what they discovered.

Mismatch between perception and reality Revelations show that actual workplace safety and perceived safety do not always match. Romania, for example, has an incidence rate of 68.9, meaning out of 100,000 workers 68.9 were injured and had to stay off work for more than 4 days (5.5 out of 100,000 on average died). Compared to other European countries in the survey, that is the lowest rate, followed by Bulgaria and Greece. France, Portugal and Spain show the highest incidence rates. 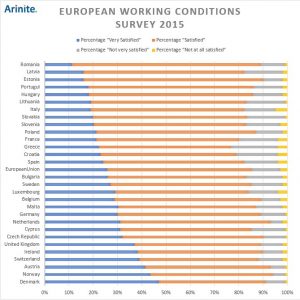 If you now look at how workers from these countries perceive safety in the workplace, the results are perplexing. Denmark, which scored fourth in the incident rating, now ranks first place, with almost 50% stating they were “Very Satisfied” with their working conditions. They thus having the most satisfied work force in the ranking. Romania on the other hand, previously having the fewest incidences in comparison, appears to be one of the least satisfied countries, with only 11% saying they were “Very Satisfied”. Reasons behind the discrepancies How come the number of accidents at work and the perception of safety do not seem to correspond very much? Firstly, the feeling of safety can be shaped by many factors, such as job quality, financial security, development of skills or national labour laws.   Also, considering the results in Denmark and Romania, the strength of bureaucracy in a country may influence the perception of safety too, as effective and exact incident reporting systems manipulate the ranking. Denmark’s high incident rate might simply be a result of the strength of the Danish accident reporting system, which leads to the assumption that safety is being regarded as a high priority – therefore workers naturally feeling safer.   Construction workers seem to feel less at risk when they feel that safety provisions and strong labour laws are in place. Creating a safe work environment is not only a question of compliance, but also of assuring a productive and happy workplace. The OSH will keep improving prevention measures, implementing existing health and safety rules, and reinforcing coordination with international organisations, like the International Labour Organization (ILO). Social safety nets also need to be strengthened to ensure accidents across the EU decrease further while working conditions improve, leading to a successful relationship between employer and employee.