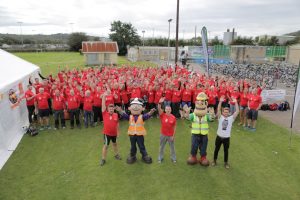 More than 150 Welsh property professionals from across the country downed their tools and swapped their suits for swimming goggles, cycling shorts and running shoes to raise over £12,000 to tackle male suicide at this year’s Wales Property Triathlon.

The annual triathlon, now in its fifth year, organised by family firm Jehu Group, took place in aid of male suicide prevention charity CALM (Campaign Against Living Miserably), in a bid to help stop male suicide, the leading cause of death for men aged 20 to 49 across the UK.  Jehu has chosen to support the charity following the loss of a respected and popular co-worker in July of 2016

Staff from the Jehu Group and Waterstone Homes, together with many of their clients including Principality Building Society, Berry Smith and Coastal Housing Group took part in the sprint triathlon, which involved a 500m pool swim, 20k bike ride and 5k run.

Taking first prize was Jamie Best, from Melin Consultants while the fastest female was Sarah Smith. The fastest team was Spring Design, made up of Alun Brown, Ian Boobyer and Sion Evans.

Jehu has taken part in a number of fundraising activities throughout the year in support of CALM, its chosen charity for 2017, including a property band night held in Cardiff’s popular music venue, Tramshed.

Anna Jones, Fundraising Director at CALM, said: “We are extremely proud and thankful that Jehu Group have selected CALM as its charity of the year and will help us to raise awareness of the fact that suicide is single biggest killer of men under 45 in the UK.  It was great to see such a fantastic turnout today and the money raised will help make a difference to the lives of men who need support.”

This year’s event, hosted at Pencoed Pool and Rugby Club in Bridgend, included individual competitors as well as teams of three, with separate members swimming, cycling and running.

New to 2017, the property triathlon saw the introduction of a ‘Buddy Up’ scheme, designed by Jehu to partner up individuals looking to complete just one leg of the race with their very own team mates to form a full squad. The novel initiative meant that professionals could still take part even if they did not have a team ready or did not want to complete the full triathlon themselves.

The scheme saw individuals sign up and buddy up with others through social media by requesting which leg of the triathlon they would like to complete. Teams were created from companies such as Trivallis, TC Consult, Linc Cymru and the Building Engineering Services Association.

Lydia Jones of Working Word, is one of the people who chose to #BuddyUp for the triathlon, keen to help raise awareness for the charity after losing a close friend to suicide herself, the actor and singer Dafydd Dafis, in April this year.

Lydia said: “Dafydd sadly suffered with depression most of his life, and it breaks my heart on a daily basis that I’ve lost him, so I was very keen to join Jehu’s triathlon and help raise awareness for CALM’s good work and its helpline.”

Jehu’s original Property Triathlon was started in honour of former Jehu Group employee, Hugh Walker, who sadly lost his life aged 46, just four months after being diagnosed with a brain tumour. The family-run construction and property firm has also supported Llamau the homeless charity prior to its support of CALM.

Managing Director of Development at Jehu Group, Simon Jehu, said: “It’s truly humbling to see our triathlon continue to grow and this year has been our biggest event to date. We are thankful to everyone that has shown their support for CALM, both those who took part in the race and those behind the scenes making valuable donations.

“As a family company, we have always tried to support charities that have a connection to our company in one way or another. Following the tragic loss of a colleague last year to suicide, for us, there was no question in supporting CALM as our charity of the year. As we have seen first-hand, suicide can affect anyone, and so it’s important to us that we can do all we can to support CALM in improving its services, raise awareness and promote understanding of the issues surrounding male suicide.

“The money we have raised is a real reflection of the hard work, dedication and generosity of people working across Wales’ property sector.”

CALM’s helpline is 0800 585858 with webchat available on www.thecalmzone.net