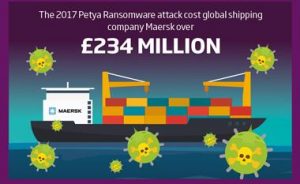 Ransomware is a growing cyber-threat that finally hit mainstream headlines in 2017, due to the Petya and WannaCry attacks that throttled the NHS and caused huge financial losses for globally-recognised businesses.

The aftermath of the attacks proved the most costly for two of the most high-profile victims of the Petya attack: Merck and Maersk.

US pharmaceutical giant Merck lost over $310million due to the production shutdown caused by the Ransomware virus. Its operations were shut down, employees weren’t even allowed to work, and it estimated $135million of the total cost of the attack was due to lost sales.

Similarly, Maersk, the largest shipping company in the world, attributed a loss of over £210million to Petya as the majority of its 76 ports were shut down. So severe was the attack, the company had to deal with no IT infrastructure whatsoever for 10 days, and manually dealt with arrivals at its ports every 15 minutes.

This infographic from UK IT support company TSG presents some key statistics on the growth of Ransomware, as well as tips on how to avoid falling victim to this omnipresent threat.