Peel Energy, the low carbon energy arm of Peel Land and Property, has announced plans to develop a district heat network at its ambitious Liverpool Waters development, under the name of Mersey Heat. 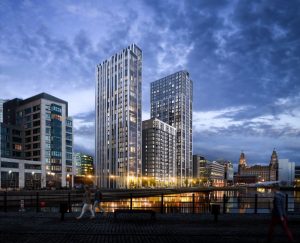 The first phase of the network is centred on existing buildings around Princes Dock along with planned new developments along the waterfront. The heat network will deliver low carbon hot water for the use of space heating and hot water provision within the buildings.

Peel Energy will operate the network through an energy services company called Mersey Heat, which will be responsible for system design, construction of the generation plant and operation of the network, providing low cost, low carbon reliable heat to the building owners and occupiers.

Development at Liverpool Waters will enjoy the benefits of a low cost, reliable heating and hot water solution for the buildings by connecting to the network, which will also have long term cost benefits for occupiers.

Muir Miller, Managing Director of Peel Energy, which also developed the wind turbines at Port of Liverpool said; “Our colleagues and their development partners are producing a first-rate product at Liverpool Waters and it deserves a 21st century heating system to match.  We believe that Mersey Heat can make a significant positive impact on the low carbon credentials of the project and provide cost benefits to developers and occupiers as well.  We are very excited at the prospect of deploying the first phase of the network and seeing how far it can grow.”

Peel’s Development Director for Liverpool Waters, Darran Lawless said: “Liverpool Waters includes the regeneration of 60 hectares of former dockland to create a high quality, mixed use waterfront development which will bring huge commercial and retail opportunity as well as over 9,000 new homes. The fact we can offer low cost, low carbon heat to a development on this scale is a fantastic step forward in us delivering a sustainable community where people can live, work and play.”

This will be Peel’s second district heat project after the successful installation at MediaCityUK in Salford which has been in operation since 2009 supplying such blue-chip customers as the BBC and University of Salford as part of the world’s first BREEAM approved sustainable community.