Tradespeople say heat is forcing them to down tools, and call for on-site water stations

Apart from the recent thunder storms, Britain’s summer has so far proven to be a very un-British scorcher. With temperatures hitting sweltering highs, spare a thought for the bricklayers, carpenters and other tradespeople that have to work outside, and who have already had to endure the bitter Beasts from the East earlier this year. 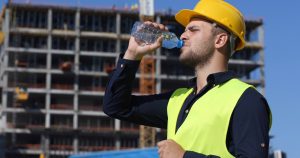 To find out how people on the country’s construction sites are handling the heat, the UK’s largest online supplier of ironmongery, IronmongeryDirect, has carried out a poll among its customers – mainly sole traders and small businesses.

The research reveals that almost 40% of respondents have been prevented from completing a job because of the hot weather. As many are self-employed, they are likely to be feeling the impact of any heat-induced pauses in work through loss of income. Their professional reputation can also take a battering despite making decisions to leave the site for safety reasons.

A Met Office spokesperson added: “We would urge high-risk groups including tradespeople to follow the Public Health England advice to take care in the sun, especially when temperatures are potentially reaching 30 degrees or more throughout this week – either stay out of the sun or be sensible and don’t go out in the strongest sunshine hours which are 11am to 3pm.”

In addition, half of the survey respondents felt that water stations should be introduced on-site to help them keep cool at work.

Wayne Lysaght-Mason, Managing Director of IronmongeryDirect, has questioned whether more should be done to protect tradespeople in extraordinary weather conditions: “This heatwave has been more prolonged and relentless than anything I can remember. With it not beyond the realms of possibility for this type of weather to become more frequent, I think it’s vitally important for tradespeople to receive more protection.”

The heatwave is not all bad news. It has resulted in more work for builders – 25% of poll participants said they are being asked to install more swimming pools and 1 in 2 have noticed a higher demand for outdoor decking.