LED lighting is known to be one the most efficient lighting technologies. For today’s new-build warehouses, it would be unusual to consider fitting anything but LEDs given their long list of benefits when compared with halogen, metal halide, HPS (high pressure sodium) and other more traditional bulbs. However, not all LEDs are created equal. It can be tempting to go for the cheapest brand when choosing commercial LED lighting, with countries such as China mass-producing LED lights at discount prices. Whilst these budget buys may seem like a good deal, factors such as rushed construction and low-quality components will quickly mean that any money saving goes out the window. Don’t be fooled; we’ve listed the top 5 reasons why you should prioritize quality over price. 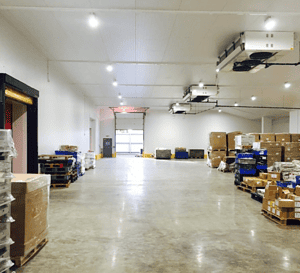 Whilst high-quality LED bulbs can initially cost up to 6 times more than traditional fittings, their ultra-efficiency quickly leads to incredible savings. This is because they use a lot less energy to produce light, drastically reducing energy bills. The best LED lights can save you up to 80% on annual running costs, which for larger-scale commercial building lighting projects means saving tens of thousands every year.

LEDs are also long-lasting, meaning replacement is required far less often than other light bulbs. What’s more, many of today’s high-quality industrial LED light solutions will have a high enough lumen per watt efficiency to qualify for the UK Government’s Enhanced Capital Allowance scheme. This scheme allows companies to write off the cost of purchasing commercial LED lighting fixtures against their taxable profits in the same year, reducing your initial purchase and installation costs by up to 23%.

LED bulbs are built to last. Most can run for 50,000 to 100,000 hours or more without a significant decrease in light output, for example UK lighting manufacturer Pulsar’s EcoRange of commercial LED lighting guarantees 100,000 hours of design life as standard. You would have to replace incandescent lighting an average of 50 times before ever needing to replace an LED, though this stat 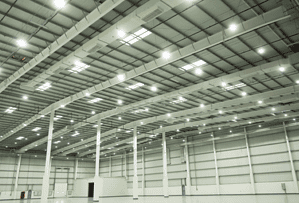 The high efficiency of quality commercial LED lighting means it converts 95% of its energy into light with only 5% wasted as heat. This is in comparison to incandescent bulbs, which release 90% of their energy as heat and CFLs (compact fluorescent lights), which convert 80% of their energy into unwanted warmth. This is not only negative in terms of the wasted energy, but can also result in overheated industrial spaces. Particularly for warehouses storing or producing consumable goods, this extra heat can be harmful.

One of the instantly visible benefits of LED lighting in warehouses is the better quality of light. Cheap LEDs have a tendency to flicker, which can create an unsafe working environment, especially for those operating heavy or dangerous machinery. This is because cheaper manufacturers build their bulbs using lower-quality drivers, weighing up what is an ‘acceptable level’ of flicker against price point. In contrast, high-quality LED lights use reliable drivers that supply them with a constant, non-oscillating current, eliminating this problem.

Good LEDs can also more than double light levels in a commercial environment. Their unique ability to emit light in a specific direction without relying on reflectors or diffusers makes it easier to create more even light distribution. This means workers enjoy a brighter environment, reducing the risk of mistakes or injury made due to poor visibility.

As environmental responsibility climbs ever-higher on the agenda for modern businesses, energy-efficient industrial lighting should be on everyone’s mind. LEDs have a positive impact on the environment in three key ways. Firstly, these lights are built to last up to 20 times longer than traditional fixtures – the better the quality of LED the longer its lifespan. This means that fewer bulbs need to be produced and so fewer of the world’s resources are used overall.

Secondly, good LED flood lights and fixtures are up to 80% more efficient than conventional bulbs, and so waste far less energy.

Lastly, LEDs are non-toxic. This is in stark contrast to the fluorescent tube lighting that still resides in a lot of commercial premises, containing hazardous chemicals that can damage the planet.