KEEPING YOUR SITE SECURE OVER CHRISTMAS 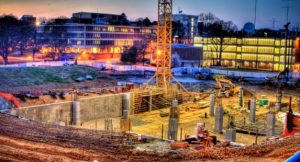 Winter is upon us, Christmas looms and many sites are preparing to shut down for an extended break. Then January and February come round with the worst of the weather, especially in the northern part of the country, which can cause temporary site shutdowns in a freeze or snowy conditions. But are you prepared???  Leigh Hooper of site security experts, Clearway, has some simple reminders to keep your site secure and protected over the holiday break or through a winter freeze when work might be put on temporary hold.

Did you know, according to the last survey by the Chartered Institute of Building (CIOB)1, two of the most common forms of crime in the construction industry are theft and vandalism? These crimes contribute to the sector suffering millions of pounds’ worth of losses every year, not just due to the financial cost of replacement or reparation, but also the resulting extra penalties such as increased insurance premiums and project delays.

Theft alone is estimated to cost the UK construction industry more than a staggering £800m annually4 according to statistics from insurer Allianz Cornhill at the end of last year, although it’s hard to get an accurate figure as the CIOB believe many of these crimes go unreported. However, the CIOB survey highlighted theft as the most common construction industry crime with one fifth of responders experiencing it weekly and a shocking 92% affected weekly, monthly or annually.  Most responders were unable to put a specific cost on theft and vandalism to their individual business but 1 in 10 reckoned it was at least £100,000 pa.

With the uncertainty of Brexit causing fluctuations in the financial markets and on the Pound, thus impacting on the cost of materials, and concern around the future availability of skilled foreign 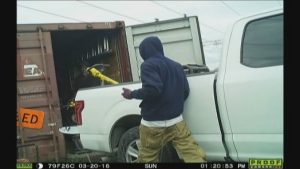 tradespeople in the workforce, and the deadline for withdrawal almost upon the UK, the impact that losses such as this could have on some companies in the construction business, and the tight margins common in the industry, could be the tipping point for some.

Construction sites can be easy targets. The main reason is that they typically lack proper security and loss prevention practices. Studies have shown that simple security lapses are among the leading causes of construction site theft:

Thieves target materials like copper and other metal supplies as much, if not more than they do equipment, although tool theft is currently at an all-time high according to the Federation of Master Builders in their latest report in October 20183 and there are over 7,000 reported metal related thefts per month.

No matter what they are attempting to thieve, most criminals have been conditioned to believe that construction sites are easy targets. The sad truth is that, for the most part, they’re correct. If you don’t want your site becoming a costly statistic, you might want to try implementing some of these preventive measures either over the Christmas break, anticipating possible restricted working in January or February bad weather, or indeed for the duration of the development.

Thieves count on being able to remain inconspicuous. They like dark, unprotected jobsites where they can get in and out undetected. Bear in mind that most construction site thefts are committed by employees or other people with enough access to the site to know their way around in the dark. Even if they think someone might be watching, most thieves will seek out easier targets, especially knowledgeable employees, so don’t make life easy for them.

Don’t keep an excess of supplies sitting around. If you can, purchase or delay delivery of what you need for when you need it so it isn’t sitting there waiting to be stolen for weeks at a time. This obviously requires good planning and communication between you and your suppliers but why leave temptation lying around? 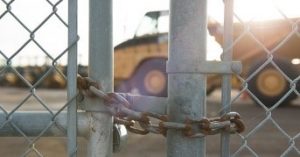 Ensure your perimeter fencing and access gates are strong and as secure as possible and  carry prominent warning signs that CCTV is in operation.  The fewer access gates, the better.

Lock all tools and small or valuable equipment or materials away securely, or remove from the site to safe storage if possible.

Consider temporary concrete barriers to block entry to the site. This will prevent ingress of vehicles and make it more difficult to load any heavy or bulky materials. They can be easily  and quickly  positioned and removed and are such a simple solution for a closure of a couple of weeks or so. 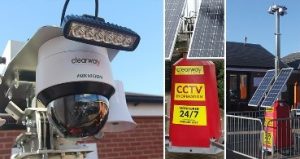 Install a mobile CCTV camera tower.  There has been endless ongoing debate about the value of CCTV in the prevention and solving of crime but there is no doubt it definitely works.  In fact the College of Policing reckons it can be most valuable in deserted or open spaces, e.g. car parks2, where figures have shown a demonstrable reduction in vehicle break-ins and theft, and it’s most effective in partnership with good site lighting. Why would thieves target a difficult to access site that is well lit, with remote cameras and movement sensors surveying everything, when they can find a dark, unsecured alternative?

For construction sites, mobile surveillance units using solar powered camera towers are an ideal solution for temporary use and MSUs can be moved as the construction site transforms throughout the project. For more extensive sites, designate areas to park vehicles and store equipment and materials and target those locations with the camera tower. The cameras give virtually 360? coverage with movements sensors and those from Clearway run with an extensive battery life and are remotely monitored 24/7 so any intrusion is immediately spotted and reported to either police or mobile security patrol units to deal with.

Managers and owners are entitled to a peaceful break, or any time away from their sites  without having to worry about what they’ll find, or rather not find, when they get back to work… and having a sense of security is so easy to achieve.  There’s a simple security solution for everything, you just need to consult the experts!