Less than 24 hours after an emergency order to supply materials to the Toddbrook Reservoir was placed, more than 8,600 bags of Saint-Gobain Weber technical mortar products were on site to help secure the dam.

The small town of Whaley Bridge in Derbyshire made headlines at the beginning of August when part of the Toddbrook Reservoir dam structure was damaged. The emergency services were clear in their warnings: there was a major risk that an estimated 1.3 million tonnes of water could suddenly overwhelm the town, putting lives at risk and destroying property and livelihoods. Some 1,500 people were evacuated from their homes.

On Friday 2 August, EPMS Supplies, a national distributor of construction products, contacted Saint-Gobain Weber to place an order for materials that would help temporarily repair the Toddbrook Reservoir.

“We received a call late afternoon to ask if we could supply in excess of 200 tonnes of Weber Precision Grout or Repair Concrete to the site the following day,” said Mohammed Aljan, head of infrastructure at Saint-Gobain Weber.

“From a logistical point of view, it was obviously a challenge. As we manufacture in the UK on a large scale, we were ready to deliver to site very quickly. There were 200 tonnes of Weber Precision Grout delivered from our manufacturing plant in Flitwick and an additional 50 tonnes already at EPMS Supplies depots.”

Nine lorries were required to transport all the materials from Flitwick in Bedfordshire to Whaley Bridge. By the end of Friday 8,640 bags of Weber Precision Grout were prepped ready to leave site.

Stewart Nicholas, operations director at Saint-Gobain Weber, co-ordinated the internal process of getting the product out to the dam on Saturday morning.

“Obviously because of the time sensitive nature of the incident, we needed to pull out all the stops to get the materials to site as soon as possible. In total we had 11 members of staff helping, including two members of staff who came from our Telford plant to help load the lorries at 6:30 on Saturday morning. Thanks to Simmonds Transport, all of the materials reached the dam just a few hours later.”

Once on site, the products were applied to the dam over a period in excess of 24 hours. Weber’s Precision Grouts and Repair Concrete has been used for over 30 years in civil infrastructure projects and are known for their strength, durability, ease of installation and non-shrink properties. 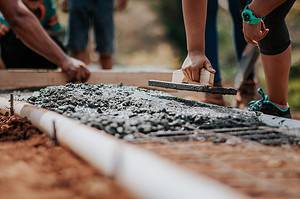