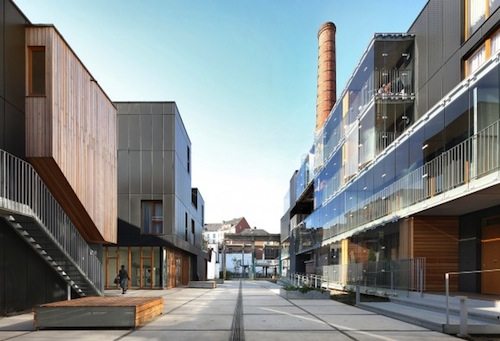 The Savonnerie Heymans social housing project is an attempt to create an entire environmentally friendly neighborhood consisting of public housing. Designed by local firm MDW Architecture, the development offers various apartment types, including lofts, maisonettes and duplexes, all of which incorporate energy-efficient qualities. Solar power and rainwater harvesting are just two of the eco-conscious features of the complex, which is built on the site of an old soap factory and utilizes the original structural elements where possible. You can see the old chimney for yourself. The 42-unit complex, which was completed in 2011, won a 2012 Prix Bruxelles Horta Award and earned a special mention at the 2012 Belgian Building Awards. 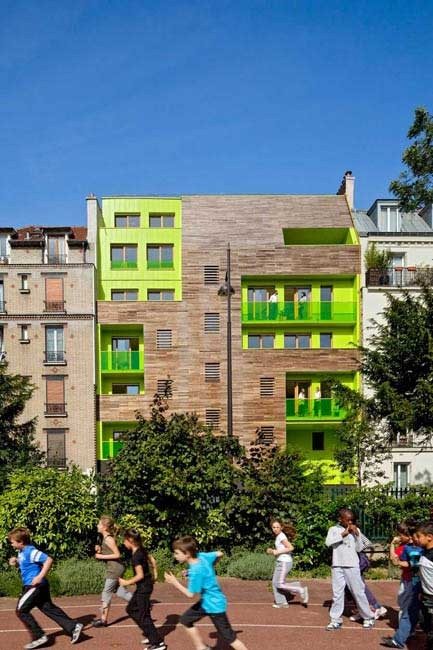 The timber façade and bright green paint of the Les Loggias housing project in Paris’ arrondissement de Reuilly sets it apart from its noticeably less vibrant neighbors. Paris-based agency KOZ Architects designed the building, giving consideration to both the environment and the needs of its inhabitants. Completed in 2011, the block is clad in neat looking ash timber, which is at once durable and cost effective. The interiors were designed to receive as much natural light as possible, and the building also features exterior insulation as well as eco-conscious solar panels. 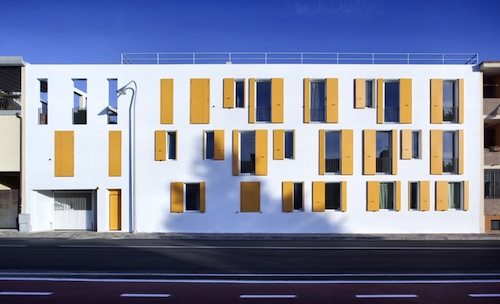 The colors of the Mediterranean were incorporated into the sunny white and yellow design of this social housing project in Elmas, Sardinia. According to Italian architects 2+1 Officina Architettura, the differently spaced and sized windows “create a vibrant and binomial play of open/closed.” The development has a walkway balcony with brise-soleil screening used as a form of climate control, and shutters on the north side of the structure shield against chilly winds. Materials were chosen to be both affordably priced and long lasting, and the development, which was completed in 2010, includes a courtyard as well as ground floor duplexes. 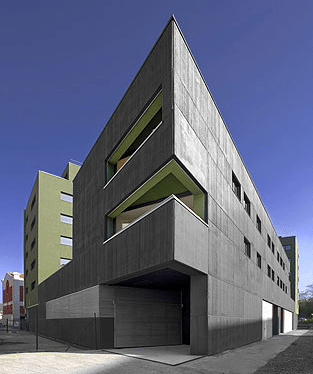 Completed in 2007, Spanish architects ACXT’s state-subsidized housing development in Pormetxeta, Baracaldo, in the north of Spain, was spearheaded by the local Basque government. Although the complex is made of prefabricated concrete, its sharp angles and modern, two-toned color scheme prevent it from resembling traditional public housing blocks. Forty-six units are housed within two separate buildings, and parking space is also provided. The plan won first prize in a scheme design competition. 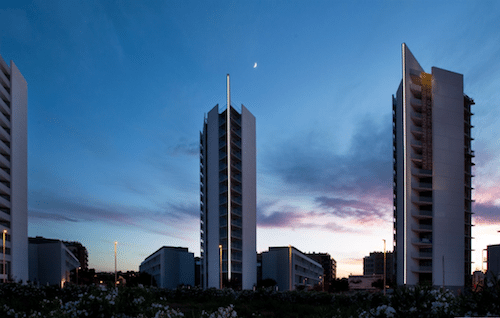 The Parc Central Social Housing Building in Valencia, Spain is made up of a large number of units shared among three non-identical towers built around a central courtyard. Two Spanish agencies, Office of Architecture in Barcelona and Peñín Architects, were involved in the design of the modern looking, aesthetically pleasing white buildings, which are situated in a landscaped park space. The project was completed in 2010. 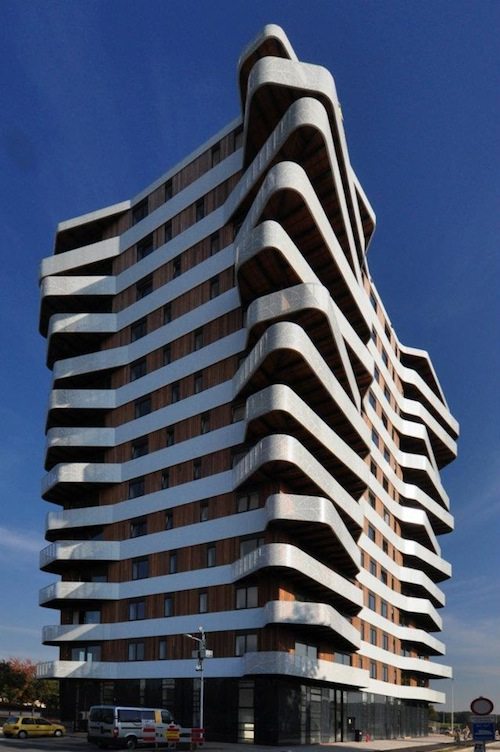 Tower Hatert in the Dutch city of Nijmegen is part of the local government’s plan to invigorate its housing. The rippling, sculpture-like 13-story building was designed by Rotterdam-based studio 24H Architecture, and it houses 72 apartments as well as a health care center on the ground floor. The timber used throughout the construction is FSC certified. And the non-aligned balconies – with the railings apparently inspired by leaf patterns – ensure that each unit gets enough natural light, while also offering residents uninterrupted views of their surroundings. This futuristic looking tower was finished in 2011. 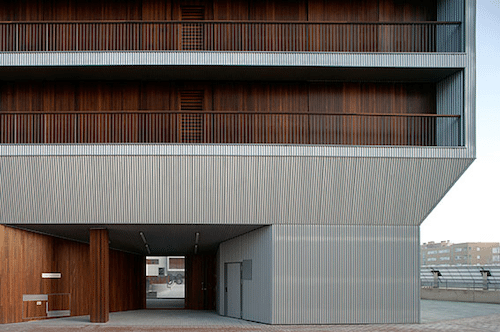 In Zabalgana, Vitoria, in northern Spain’s Basque province of Álava, Spanish architects ACXT developed this striking social housing project, which contains 65 residential units. Completed in 2006, the building incorporates wood on the balconies and in the foyer area, providing aesthetic warmth and complementing the building’s colder, stylish metal cladding. Despite strict affordable housing guidelines, ACXT stuck to their aim and achieved what the company describes as “a deep environmental and landscaping sensibility.” The project was pushed forward by the VISESA group, which is financed by the Basque government. 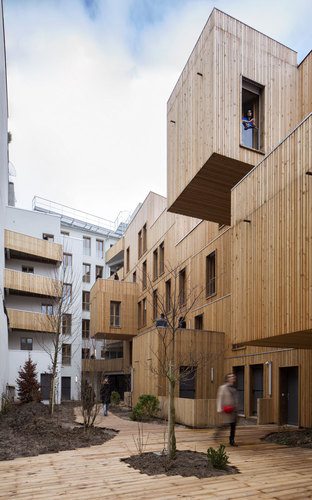 This wooden structure may look more like an ancient fort than a modern complex in a busy metropolis, but Paris’ Tête en l’air (meaning “head in the clouds”) social housing project is definitely the latter. Designed by Paris-based agency KOZ Architects, the complex, which includes thirty units – 15 brand new and another 15 rehabilitated from the pre-existing structure – was completed in 2012. The project was undertaken for social housing organization SIEMP, a group committed to sustainable architecture, including the renovation of older buildings. 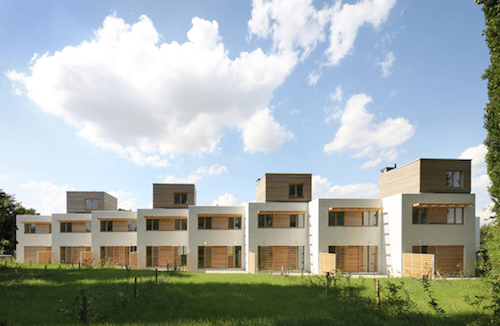 This project in the Brussels municipality of Sint-Agatha-Berchem may be new, but the district it is located in has been dedicated to social housing since the early 1920s. Architect Victor Bourgeois created the original district, and Belgian architectural firm Buro II & Archi+I designed these new units, which were completed in 2012, to complement Bourgeois’ cubist style. They are also low-energy units that incorporate solar panels, rainwater retrieval systems and eco-friendly materials – a far cry from the gray tower blocks many picture when they think about social housing. 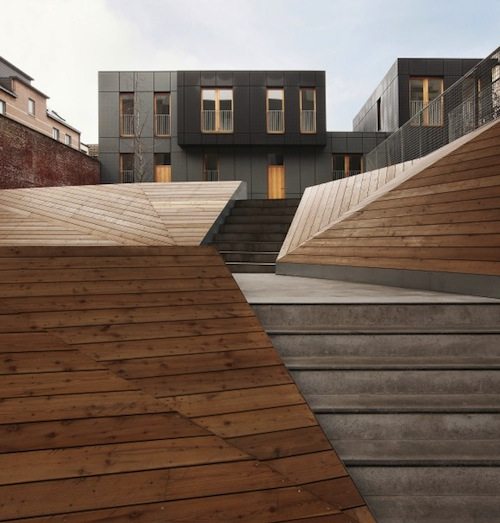 Designed by Belgian agency MDW Architecture, the Le Lorrain social housing project is actually a repurposed old iron dealer facility located in Belgium’s capital, Brussels. Completed in 2011, the new complex consists of a multi-unit apartment building and three terraced maisonette homes, each of which has its own private garden. Originally, a high wall surrounded the eastern side of the site, but this was lowered to allow in more light, and the complex has a large, open communal space for residents to use. The design of Le Lorrain is contemporary, yet it still retains a vestige of the site’s industrial heritage.