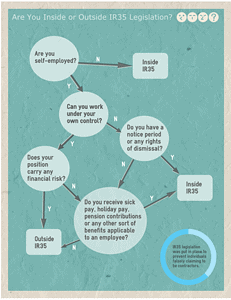 One of the most common concerns for contractors in the UK is their employment status and this is monitored by HMRC using the IR35 calculator. Whether a contractor falls inside or outside IR35 legislation will have a major impact on how much tax they pay. Complications arise for independent contractors because different jobs require different contracts and sometimes these contracts will tread a fine line between being inside or outside of IR35. It can be pretty confusing, but if an independent contractor pays attention to a few key areas they should be able figure out how IR35 affects them.

IR35 was put in place in 2000 to prevent employees posing as contractors for tax reasons. Prior to IR35 it would have been possible for someone to leave their job on a Friday, set themselves up as an independent contractor over the weekend, then return to do the same job on Monday;  while paying a lot less tax without having to take any of the actual risks a genuine independent contractor would.

–          Responsible for providing their own equipment

–          The contractor is not paying for their own tools or equipment

–          The contractor is paid a wage, given contributions to a pension or has paid holidays

Any of the following criteria would see a contractor classed as an employee. If the criteria above apply then it would unadvisable to claim independent contractor status because an HMRC investigation would likely judge the contractor as fraudulent. The punishment can be a fine of between 30-100% of the PAYE and NI avoided; the severity of the fine depending on whether the contractor’s false status is deemed to be careless, negligent or deliberate.

There are no hard rules regarding IR35 but if HMRC demand proof of a contractor’s IR35 status they are likely to consider the key points mentioned above. The contractor will also have to provide evidence that they are operating within the approved guidelines. If a contractor is still unsure then an increasing number of small business accountants that specialise in   contract accounting are available to advise them on how their work relates to IR35.