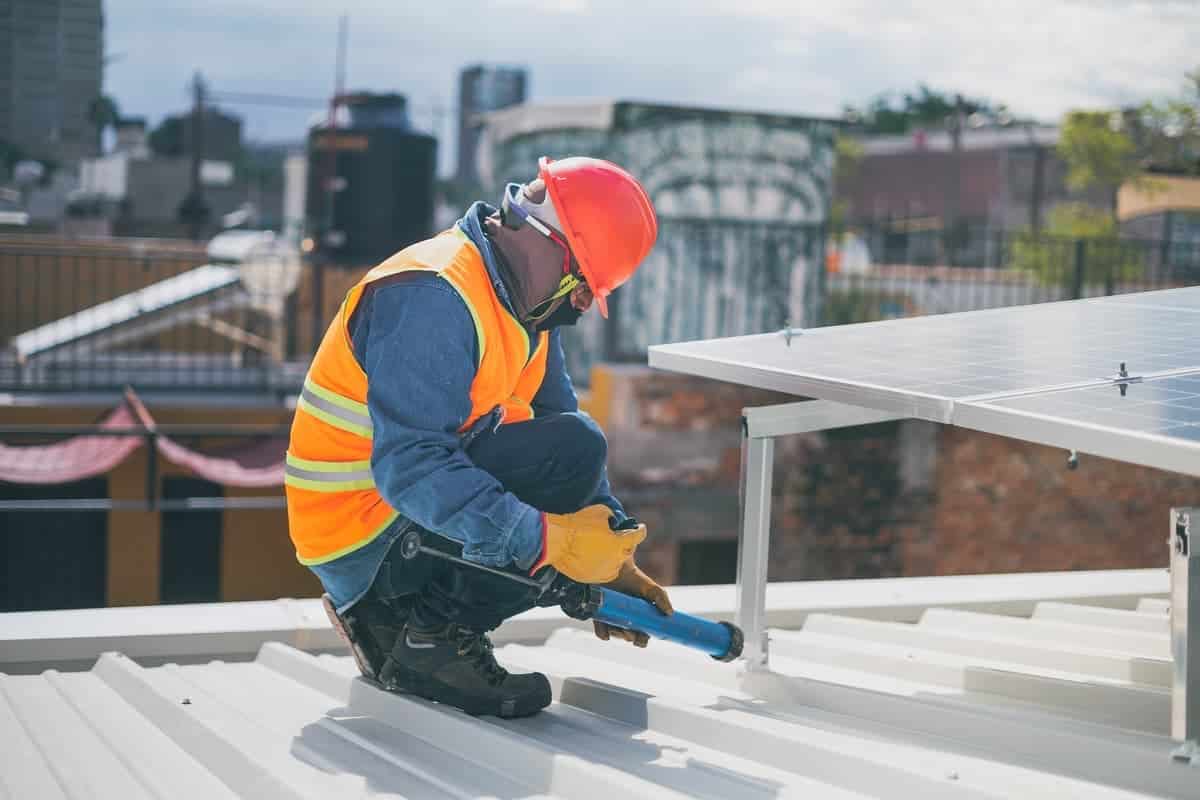 In this article, you will learn more about the heatwave at the construction site. Is it safe to work in that state? What are the precautions for working on a hot day? Who’s in danger from working in such a high temperature? What are the risks? Meanwhile, Rishi Sunak visits a construction site wearing Prada suede shoes. Let’s read and find out more about Rishi Sunak. Additionally, construction of the DORSET Police headquarters will begin soon. Furthermore, the judge rules over the client in a cladding case. The client was successfully sued!

Original Source: Too hot to work: Working safely on a construction site during a heatwave

When does it become too hot to work and how can we protect employees?

The summer heat makes working conditions harder. More construction workers are at danger of the adverse effects of working in hot temperatures, not to mention equipment and construction processes that emit heat. As temperatures rise, these dangers grow.

How can construction projects be kept moving without affecting employee health? Here are ways construction workers may be safe during heatwaves.

Government guidelines on working in a heatwave

Employers must create a healthy, safe work environment for their employees under the Health and Safety Work Act of 1974. During hot and dry circumstances, this entails controlling the dangers employees experience from working in hot temperatures or the sun. There’s no maximum temperature for working outside in the UK, but employers are urged to exercise their judgment and take action when necessary. Humidity, wind speed, and clothing can impact the air temperature. Having a wet bulb globe thermometer or electronic equipment to detect humidity on site will assist in guaranteeing nothing is missed.

Thermal comfort is between 13 and 30 degrees, and for intensive work, temperatures should be lower. Construction organizations must do regular risk assessments to safeguard employees from heatstroke, sunburn, heat rash, and dehydration.

Heat exposure can cause numerous illnesses and ailments, including heat edema, a swelling that usually affects the ankles. Heat rashes, cramps from excessive sweating, and tiredness can produce dizziness, visual abnormalities, nausea, and headaches. In severe circumstances, heat stroke can cause loss of consciousness, confusion, and convulsions. Delaying treatment for heat stroke can be dangerous.

Who’s at risk during a heatwave?

Heavy machinery, lifting items, and driving increase temperatures and heat stress for construction workers. Heat can be a problem for drivers if they grow fatigued or pass out from the heat. In hot weather, employers should provide air-conditioned automobiles or avoid driving.

Working in hot circumstances all day is not only uncomfortable for personnel, it’s also risky and can put health and safety at risk. Using risky equipment and falling ill from heat might have dire repercussions. Employers must ensure their workers’ safety by regularly evaluating the temperature to prevent heat-related illnesses.

Knowing the indicators of heat exhaustion and other heat-related disorders can help prevent on-site dangers. These diseases vary in severity and shouldn’t be treated lightly. Watch out for these warning flags in coworkers:

Physically taxing tasks should be rescheduled to a cooler time and staff should be rotated to give everyone a respite. Managers must ensure that personnel operate equipment safely and wear PPE to keep the location safe.

Working in greater temperatures wasn’t a worry several decades ago, but as the climate issue pushes up temperatures, construction workers in the UK must focus on it to keep staff safe.

Since construction workers are more likely to be outside, they must take steps to minimize heat-related concerns.

An employer who doesn’t keep the workplace safe may face prosecution and fines. Everyone must follow instructions to be cool, hydrated, and safe.

His £180 coffee cup and £5-a-bag snacks reflect his affluent tastes as a Tory leadership contender.

He told Teesside Live, “I know times are tight and people are nervous about paying their expenses.”

Mr. Sunak conceded he couldn’t “wand away” cost-of-living constraints, but support would be aimed “at those who need it most.”

It is unknown how much the Tory leadership candidate spent on the old shoes.

They built a tennis court, a gym, a 12-by-5-meter pool, four baths, utilities, and storage rooms.

Mr. Sunak starts his day with a workout on his £1,750 Peloton bike, led remotely by Cody Rigsby.

He posed in £95’slider’ shoes and a £180 Bluetooth Smart cup’ before the Budget.

Mr. Sunak’s family drives a Volkswagen Golf around London, but he has four automobiles, including one in Santa Monica.

He and his wife contributed £100,000 to Winchester College, where he was head boy.

Cameras saw him struggling to use his debit card while buying gas.

Mr Sunak threatened to remove hundreds of remaining EU legislation if he wins the Tory crown, to win over Brexiteers.

First proposals to repeal or alter rules must come within 100 days of Mr. Sunak entering No10.

DORSET, Mid-September is when police aim to start building their new headquarters.

Dorset Council will decide on a request to alter planning permission on July 20.

The exact features of the plans can’t be confirmed, but the three-story building will replace the Winfrith police station.

The force will remain in the neighborhood, and the original HQ won’t be dismantled.

Police and Crime Commissioner David Sidwick told Dorset Council’s Police and Crime Panel, “The designs clearly illustrate that the new facility’s footprint has been designed so that destruction of the present building is not needed until after construction is complete.”

This allows officers and personnel to continue working in the building without finding temporary housing.

“For the avoidance of doubt, I can affirm that the cost remains commercially confidential, but we will bring this to the public as soon as possible – we believe by September.”

When asked about a timescale for the headquarters replacement, Dorset Police said they were awaiting a July 20 judgment on existing planning limits before alerting their contractor of the final specification and receiving a final price.

If all goes well, the contract will be awarded in early September and construction will begin in mid-September, according to the Police and Crime Commissioner’s office.

When the new headquarters is finished in early 2024, the old one will be demolished.

The designs were approved in March despite worries from Wool parish that its dazzling surfaces could lead to bird deaths as they try to fly through the surface into the reflected countryside.

The usage of such technologies was questioned after the Grenfell Tower catastrophe in 2017. Martlet Homes Ltd (part of the Hyde Group) sought £8m in damages from Mulalley. Only four towers were litigated; the fifth was too old.

The decision also awarded Martlet damages for the waking watch service it had to install as a temporary mitigating measure for the cladding’s dangers pending removal.

Mulalley claimed its products and designs were officially certified and authorized. The judge’s decision that BBA certificates are neither a ‘guarantee’ or ‘passport’ to Building Regulations compliance could be significant.

This is a significant win not only for the Hyde Group but for many UK building owners facing similar cladding issues, the law firm said, and for the construction industry as a whole, because it offers much needed guidance on the court’s approach to numerous issues affecting the hundreds of cladding disputes ongoing in the UK today.

Norton Rose Fulbright lawyer Simon Ramsden commented, “We’re proud of the role our team played in obtaining this settlement for the Hyde Group.” “We believe the court’s instructions will promote the resolution of numerous cladding-related disputes.”

In today’s news, you have learned more about the heatwave that has been a problem for workers at a construction site. It makes the working conditions even harder for them. I am sure you have read all the safety precautions construction workers should take for them to be safe. Of course, if you are an employer, you have to provide safety measures to protect your workers, as you can’t possibly afford to lose them. Employers should take care of their workers, as the workers will do otherwise.

As for Rishi Sunak, an Ex-Chancellor and a Tory Leadership Candidate visited the construction site wearing Prada suede shoes. He was also seen wearing brown loafers to Teesside Freeport the other day. Mr. Sunak admitted that he was unable to “wand away” the restraints caused by the high cost of living, but he promised that support would be directed “to those who need it the most.” What can we say? He is a millionaire. He can afford whatever he wants!

Moreover, the DORSET Police Headquarters will begin its construction in Mid-September. The three-storey building is expected to replace the old headquarters. But the old HQ will not be demolished as the officers and staff could remain to work and won’t be needed for temporary accommodation that will give additional cost. For the cost of the building, they can’t reveal it now because it remains commercially sensitive, but they promised to publicize it as soon as possible.

In a cladding case, a housing association was able to win a $8 million lawsuit against the construction company Mulalley & Co. because of the company’s use of a flammable cladding method when renovating high-rise apartment buildings. Between 2006 and 2008, Mulalley renovated five concrete tower buildings in Gosport using an EPS EWI cladding system. These structures were constructed in the 1960s. Martlet Homes Ltd, which is a subsidiary of the Hyde Group, filed a claim for damages totaling £8 million against Mulalley. Due to the fact that the fifth tower was too ancient, only four of them were litigated. Judge Stephen Davies’ decision was found in favor of Martlet Homes, despite the fact that Mulalley denied any responsibility in the incident.